The new complex coming up for the new headquarters of Antwerp Port Authority in Antwerp, Belgium can be stated to be a masterpiece. Being designed by London based architects Zaha Hadid Architects, the new extension is expected to be completed in 2013 and will house about 500 staff members, with the existing building will be refurbished so that the public counters, meeting rooms and offices be in that place. The new building which shall be five stories high will consist of auditorium and restaurant and additional offices and meeting rooms. It will be a towering structure overlooking the city and will sure be a monument to look out for. 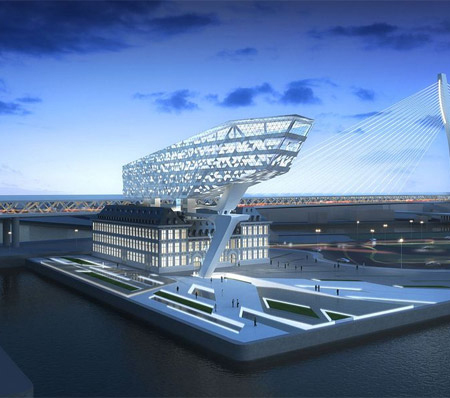 [Press Release]
The future headquarters of Antwerp Port Authority will be designed by the London firm of Zaha Hadid Architects. The choice of architect was made at the Port Authority board meeting on 13 January. The new Port House will occupy the site of the technical services building on quay 63.

The Port Authority aims to make its operations more efficient by centralising the administrative and technical services which are now divided between the Port House and quay 63. The new headquarters will also solve the pressing shortage of workspace in the present Port House on the Entrepot quay. Some 500 people will be able to move into the new building when it is completed in 2013.

In addition to offering better accommodation, the future Port House will contribute to further development and upgrading of the part of the city known as Het Eilandje. The brief for the new building specified that it had to symbolise the Port of Antwerp as a world port and economic driver of Flanders and the Antwerp area. It also had to be built according to the principles of sustainability.

In selecting the architect it was decided to use the Open Call for Tender procedure of the Flemish Government Architect’s team. The procedure was launched in December 2007, and nearly 100 architectural firms responded. A shortlist of five firms was chosen:

The jury/board of directors finally opted for the proposal by Zaha Hadid Architects, because: The estimated construction cost is 31.5 million euros excluding VAT and architect’s fees. This includes all the work for an office building with around 12,000 m² of floorspace for around 500 people, together with underground parking for 300 or so cars.

The new building fits in with the Port Authority’s future-oriented investment policy. At the same board meeting it was also decided to purchase four tugs as part of a renewal series of nine. And of course there will be further investments in infrastructure for expansion and renovation of the port. The various Flemish port authorities are currently holding discussions with the Flemish Government about financing for basic port infrastructure.
The new Port House forms part of a programme of improvements to the Port Authority’s own buildings. In addition to various renovation and new construction work that has already been carried out, a public call for tender has been issued for the new VTS (Vehicle Traffic Service) building beside the Zandvliet lock. The design team from Zaha Hadid Architects proposed a very dynamic architecture that strikes up a dialogue with the Oosterweel road link, with the Lange Wapper bridge forming a backdrop to the New Port House. With its unique design, its facade architecture and its height of 46 metres, the new Port Authority will be an iconic building, visible from many different directions.

The concept is a free interpretation of a beam-shaped volume raised above the existing fire brigade building and supported on three sculptured concrete pillars housing the stairs and lifts. Two of the pillars are situated on the covered inner courtyard of the firehouse, while the third is located beside an external support point and consists of a panoramic lift shaft.
The new volume is oriented North-South parallel to the Kattendijk dock. The head of the building on the South side is a frame that looks towards the city and clearly marks the start of the port area.
The outside walls are made up of glass triangles, some transparent and some reflecting. These do not all lie in the same plane but are rotated slightly with respect to one another, creating an attractive reflecting play of incoming light in a reference to Antwerp’s diamond industry. The present firehouse will be kept free of building all around, so that the four outside walls will be fully respected. As for the arrangement of the inside spaces, consultations will be held with Flanders Real Estate Heritage and the Monuments department of the City of Antwerp to determine whether open-plan offices (as laid down in the schedule of requirements) are possible, either partly of throughout.

The inner courtyard will be roofed over at the height of the second story so as to create an air-conditioned inside space. This central entrance hall will be considered as a semi-public space, with various enquiry desks (Personnel department, Harbourmaster’s Office, Planning Permission & Environment Permit office and Port Dues payment desk) integrated in the inside wall portals.

A sculptural, sloping roof unites an underground lobby with the covered inner court. Access to the underground car park is an important aspect of the overall concept, with the loading & unloading bays and the refuse handling facilities also located here. The car park has space for 300 or so cars and consists of a single underground level. The design of the square can be arranged so that daylight is allowed to enter. The above-ground layout forms part of a design project that is being carried out in consultation with the city departments responsible, with the main imperative being to “preserve the visual quality of the outside spaces in the Het Eilandje area.”

The open plan offices are indeed very open, so that office staff will have a great impression of space with a view along the various outside walls. The concept for the open plan office also allows for small areas in which to hold meetings, along with separate study offices.